You are here: Home / alternative / Atticus Clothing: A Ten Year Love Affair
A long long time ago in a galaxy not too different to this one I was an awkward teenager…..a very awkward teenager.  I was cripplingly shy and uncomfortable in my own skin.  I didn’t follow fashion but I didn’t have an individual sense of style either.  In short, I didn’t feel like I fit in anywhere.
Then, one Saturday, on a trip to my local shopping centre I popped into a music store and decided to pick up a couple of albums, ones that would be a step up from usual Busted.  I grabbed a few that I’d heard of, thought were cool and even prayed might get the attention of the cool alternative skater guys in my school.  Amongst them was the game changer, Take Off Your Pants and Jacket, by Blink 182.
If you’ve been following this blog for a while then you will know that I am a massive fan.  Its a cheesy statement but they honestly did change my life.  I made friends because of them, I changed my style because of them, it opened up my mind to so much more music and it changed my hobbies.  Now me and my new friends were spending our saturdays at the skatepark, checking out the alternative shops and feeling like we belonged somewhere.  This, is how I discovered Atticus.
I had noticed Blink 182 wearing clothing with the distinctive black bird for a while and discovered it in one of the alternative stores we used to visit.  I soon learnt they were a brand created by Mark and Tom from the band and this just increased my interest.  Soon I was saving up my pocket money to grab some for myself.
As soon as I could afford I jumped online and ordered a T shirt.  I have a distinct memory of receiving it through the post, immediately jumping into the car on the way to a gig and changing into it right there in the car!  It was my first alternative branded clothing and I was very excited!  It was a black t shirt with a pink and white logo design.  I loved it and wore it a lot!  It was well made so despite me wearing it as often as I could get away with it lasted for years.  This was just the start, soon enough I’d saved up for a hoodie (which I really did wear to death, I was never seen without it!) hat, vest tops and a skirt.
With that in mind, are you ready for some embarrassing photos?  Well here you go:
I don’t have many photos from my late teens because I was camera shy, apart from the obvious myspace style ones.  I think thats probably a bit of a blessing.  I used to cover my room with the infamous dead bird logo that came with the clothing and at festivals.  I sill have one on one of my notebooks 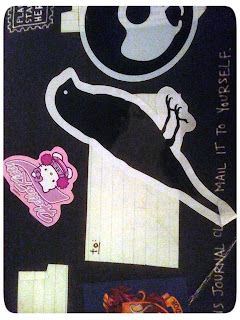 For me, it’s a brand of nostalgia.  Whenever i see there clothing it always reminds me of young happy times.  However just like I’ve grown up, the brand has too.  There is a more adult alternative look now and it’s ability to change with the times has to be one of the reasons for it’s success and longevity.
The final reason I love Atticus has to be the active association with live music.  Nearly every festival I’ve been to for the last 5 or 6 years has had Atticus represented in one way or another.  Sometimes with a merch stand, often with the signing tent and it is really good to see a brand sponsor live music in this way, especially with smaller emerging artists. I’m happy to say that I’ve met some of my favourite bands this way.
And why am I expressing my love for Atticus all of a sudden?  Well it’s because they are currently running a competition for bloggers and the winner receives £200 worth of Atticus vouchers!  Want to enter yourself?  Find out how here: http://etailpr.blogspot.co.uk/2013/09/exclusively-for-bloggers-win-200-to.html
a Rafflecopter giveaway
If you want to know more about Atticus Clothing you can check them out at the website here:     http://bit.ly/14Ypfny