You are here: Home / 2013 / Selfies of 2013
Time for a bit of narcissism!  I’ve not been feeling great about myself lately, in fact I am currently feeling pretty dam awful.  Post christmas has left me a lot heavier, my skin is bad, my hairs a state and looking through these photos I can tell I’ve aged this year.  With that in mind, I’ve seen this ‘selfies of 2013’ tag floating around on tumblr and a few other places and I thought maybe this would make me feel a little better and remind me of some of the stuff I’ve done this year.  So without further adieu, on to my face! 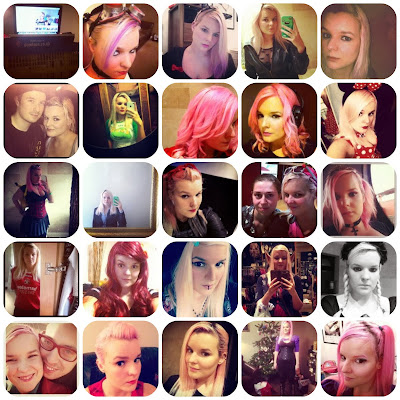 So just a little run down left to right:
1. At the start of this year, when I was still living alone in Hull, filming a youtube video, a project that quickly failed
2. After moving back to my parents, in an attempt to reconnect with people, before heading on a night out to the Wendyhouse
3.I got all dressed up then ended up just sitting at home playing monopoly with my family
4.Dressed up in a last minute Tonks costume for my sisters 17th Birthday in February
5. When I moved back home I was without a job for most of the year and I didn’t really know anyone, as a result I attempted to regress.  This is a pic from one of the many monday student nights I attended, in the toilets no less, keeping it classy!
6. A year highlight, meeting matt from Funeral For a Friend after a gig, something I’d dreamt about since I was about 14
7. Another student night, I also tried to dress the same as i did when I was 17
8. After months of playing I made my hair the perfect colour pink!
9. Attending my first silent disco with an old friend I hadn’t seen in ten years
10. Minnie Mouse for my friends birthday
11. All dressed up for resistanz festival in April
12.  I spent most of the year attending theatre interview after theatre interview, heres one of my suits
13. Drunk before going to see The Specials
14. At Slam Dunk South with my friend, we had a great day, and it ended with me and my boyfriend becoming ‘official’ and having a very important heart to heart confessional at 5.30 am with no sleep!
15. On my way to a gig, all I remember was it was stupidly hot and the weird goth girl on the bus on the middle of summer was getting some strange looks!
16. Before one of the few football matches I attended this year
17. At my friends birthday, trying on an Ariel wig, still considering dying my hair this colour
18. Meeting an old friend, complete with beanie and fake lip piercing, turning me back to the emo teen I once was!
19.Trying on some elf ears
20. I couldn’t afford a Halloween costume so I nocked together this wednesday adams look
21. Me and my boyfriend in London
22. Ready for a night out in Soho with my sis
23. Before my first ever christmas party at my new job after a huge career change
24.Before my last night out of the year in sheffield, super goth hight boot apparel in front of the tree (my dad insisted)
25. My make up on the above night complete with freaky eyebrows, I am aware I look like an alien…
So there you are, I tag anyone who might need a little post holiday season pick me up!
« Books 2013: Part 5
Books of 2013: Part 6 »